Emily Freeman‘s A Million Little Ways and had come to her exploration of Peter sinking into the water after he had been walking on the waves with Jesus.  Most Christians tend to see this as a moment of failure for Peter.  He was so close to doing something awesome and then, bam . . . he blew it. Maybe you can relate.  I know I can.  I am a striver.  A certified type A, working-till-I-get-it-right kind of girl.  I often have big expectations of myself and others.  Just the kind of person who thinks walking on water would be fabulous .  I work and I try and I make efforts.  But I’ve never quite made it to awesome.  Mostly I make it to tired and cranky from trying so hard.  Which isn’t much fun.

But here’s something I’m learning.  Maybe human beings were never actually meant to walk on water after all. 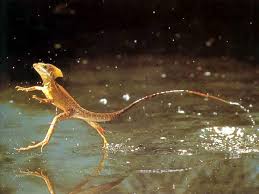 Actually I learned this lesson over the summer with my kids.  They had watched some Wild Kratts episode where a lizard with big feet walked on water.  That afternoon at the pool they tried their best to re-enact the water walking.  They made hypothesizes and tried them out scientifically.  Maybe if we wear big flippers it will work.  Maybe if I get underneath you and blow bubbles it will work.  They tried and tried and tried.  I let them go on for about an hour as I found their ingenuity adorable and hey, it kept them from fighting or nagging me to throw dive rings.  Finally they wore them selves out and came to me in defeat for comfort and Cheez-its.  “Maybe people aren’t made to walk on water like those lizards, ” I consoled.  I didn’t bring up the story with Jesus and Peter, but looking back I wish I had. I could have shared with my children something it took me forty years to learn.  No matter how hard you try you are always going be a fallen human.  And fallen humans don’t walk on water, they sink. But depravity is such a hard word.  We don’t like to say it, don’t like to think of ourselves that way.  It sounds like a word that should be used only to describe creepy old men. But then my friend, the Presbyterian minister said this.  “I don’t think total depravity means that we are all bad.  It just means that every part of who I am is touched by my fallen nature.”  Oh Yes.  My tired, cranky body, noticeably unmopped floor, and overflowing e-mail inbox attest to this.  I AM fallen.  In every aspect of my life.  And guess what?

Because I was never designed to be the water walker.  Someone else was made this way and his favorite thing is to go about reaching into oceans to pull people out from the waves of mess and chaos that lap around their ears.  It’s called grace.  And humans being were made to receive it.  To need it even. [caption id="attachment_592" align="alignright" width="300"]

opening to grace[/caption] And the lovely thing about being a grace receiver is you no longer have to wear yourself out trying to walk on water or flail to keep yourself from sinking in the deep.  For grace receivers are made to float.  To lay back with open arms and eyes turned up to the sun.]]>

2 thoughts on “Only Human”